On Friendship, Madness and Free Samples

Some will be pleasantly surprised, as was Princess Pissant, to discover that the old saying – There’s a sucker born every minute – is, in fact, entirely true. What exactly do I mean by that, you ask, somewhat defensively?

Well, get this: unexpectedly – and yes, inexplicably – Princess Pissant has been awarded yet another contract to hang over her head!

Yep, that’s right. I’ve got work. To do. And you and I both know what that means. Back. To. The. Office.

But before you go whooping and hollering in delight and thereby disrupting your own place of employment – where probably you should GET BACK TO WORK! – let me further explicate: to our collective misfortune, this new contract I’ve got hanging over my head is even more confounding than those that previously have hung over my head. Indeed, this particular project is going to require me to get my thinking cap on. So, sorry to report, I’ll have to make today’s entry shorter than usual . . .

The good news is that I’ve got no sick kids nor dying relatives nor any Athleta catalogs to otherwise distract me, so I can just update y’all in a jiffy, and then attend to that contract-thingamajig.

First: a few changes of note here at the Office: it is absolutely and totally . . . empty. Eerily empty, even.

I am here. And if I continue to talk about myself in the third person, Princess Pissant is here. So that makes two of us.

And of course the baristas. (For those new to PrincessPissant-AnotherDayattheOffice, the Office is, in fact, a Starbucks.) But TMABITW – The Most Awesome Barista in the World – isnot here, and neither are any of my regular officemates. FSGA (Former Secret Government Agency) Guy is not here; nor is Mommy-blogger, nor any of the failed writers or World of Warcraft Geeks. The Homeless Lady is also out, as is the cheapskate with her colicky newborn who’s forever interviewing prospective nannies.

I’ve got to be honest with you. It is downright lonely.

And I’m a little hurt. Do you think that everyone just moved on, in my absence? Up and got real jobs and left, without even a proper good-bye? It’s hard to imagine, but I’ve got to accept that it might be true.

Without the camaraderie of my colleagues, it’s a little difficult to get anything done. I just keep staring at the creamer bar, depressingly undisturbed, and waiting for that gust of wind each time the door opens. But whenever it does, it’s just someone I’ve never seen before, who gets his cup of coffee and then leaves. Insensitive jerks.

What’s more, the Office is all got-up for Halloween – pumpkins and gourds on the conference table and faux spider webs stretched across the wall – which adds an element of pathos to the emptiness.

And the silence! Gone is the hustle and bustle of the Office, once so vibrant with the click-clack of fingernails on keyboards, friendly banter over the availability of electrical outlets, and deafening roar of industrial toilets being flushed.

Okay, I’m going to get to that damn contract, before I make myself cry.

Well, I obviously spoke to soon. Just when I thought that neither I nor my circumstances nor my mood could possibly sink any lower . . . in comes a new addition to the Office: Guy Who Is Either Psychotic Or Has Tourette Syndrome (GWIEPOHTS).

Yup, just as I resign myself to actually working, this fellow (mid-20s, not bad looking) for some reason foregoes the multitude of otherwise empty seats scattered about the Office, and plops himself down right next to me, wherein he commences twitching and muttering obscenities . . . at distinct 60-second intervals.

I am not entirely sure – and no need to ask GWIEPOHTS to repeat himself, since invariably hewill – but I think he just called me the C-word. (And I’m not talking about Cancer.)

By utterly pure coincidence, earlier this week, Princess Pissant was informed that an old friend of hers has succumbed to, for lack of a better word, madness, and is, for all intents and purposes, homeless and “on the run.” This was stunning and disturbing news for Princess Pissant in that last she checked in with said mad, homeless person, he was young and handsome, potentially brilliant, and basically – full of promise.

Now, Princess Pissant has been told that he is aggressive and prone to violence, and that she should be wary and avoid him at all costs. If he reaches out, Princess Pissant is either to ignore or report him to the authorities.

This goes very much against Princess Pissant’s nature, believe it or not. Notwithstanding her consummate self-absorbedness, Princess Pissant does not turn her back on an old friend.

In any event, I’ve not heard anything from my old friend, mad, homeless and on the run, but I’ve spent a lot of time this week wondering: how does this happen? How – in this great country of ours – does someone like that fall between the cracks? And yet it must happen every day. If you live in an urban area, and maybe even if you don’t, you see the faces of the mad and the homeless and the on-the-run every day.

But until you know someone to whom that has happened, you probably don’t think that they at one time occupied a whole other world – a world like yours, and mine, and Princess Pissant’s – with Moms, and blogs, and fancy coffee beverages, and an endless supply of old friends.

GWIEPOHTS just snapped at me again. I am wondering if perhaps he’s the root cause of the mass exodus of Office-mates. And, if so, where did they go? And can I come too?

Here’s the worst part: at this point, I feel slightly threatened by GWIEPOHTS but there’s no way I can possibly get up and leave. My departure will seem obviously linked to him; which of course it would be. And judging by GWIEPOHTS’s actions and words, the poor opinion that I’ve formed of him is surpassed only by his of me.

And maybe, in some small way, GWIEPOHTS has come to symbolize . . . my old friend.

So I’m not going to turn my back and just go. I’ve got no choice but to wait, to ride out this storm . . . staring at the barren creamer bar and waiting for some Angel of Mercy to come my way.

Oh wait, here he is, or here he comes . . . The SECOND Most Awesome Barista in the World – TSMABITW! – wielding a tray of free samples: tiny cups of hot cocoa with whipped cream and bites-size chunks of lemon pound cake! What is it with these guys and their ubiquitous trays of free samples?

But who gives a shit? The free sample tray might as well be a taser gun!

For, GWIEPOHTS has stopped twitching and cursing and calling me the C-word, and presently, he is 100-percent focused on the tray of free samples. He’s reaching for one as I type, and now is my chance! Here is where Princess Pissant will make her escape.

But not before just one of these for myself . . .

Pray for me now, my followers . . . as I lock eyes with GWIEPOHTS, and raise this tiny free sample of hot cocoa with whipped cream in the name of my old friend. Forsaken, but not forgotten.

REMAINS OF THE DAY 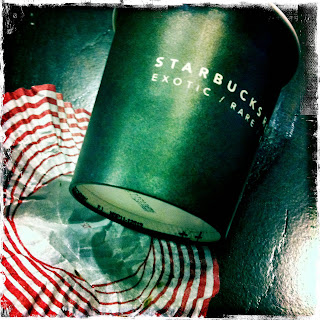