The Link Between Exercise, Deer, Depression and Death

Before heading to the Office this morning, Princess Pissant decided to do something she’s not done in several months: EXERCISE.

All this blogging to the tune of lattes and high-end McMuffins here at the Office have Princess Pissant packing on the ol’ L-Bees; and, yes, while PP fully concurs that every body needs (and deserves) an extra little layer of insulation before the onset of Winter, the fact of the matter is, Princess Pissant can’t fit into her pants. And she refuses to let herself become one of those ladies who wears a stretchy muumuu to work.

Back when I worked for the government, I enjoyed a surprisingly well-equipped gym, located in the bowels of the federal building where I worked. While not a paradigm of physical fitness, I prided myself on at least being able to fit through the badge turnstile without having to turn sideways and suck in my belly. (Believe me, this was A LOT more than some people could say.) I often would forgo lunch and spend 40 minutes sweating my butt off on – and clinging for dear life to the sides of – a Stairmaster. (I’m not even sure if anyone does Stairmaster anymore? Or if that’s something passé, like Aerobics while wearing legwarmers and a terrycloth headband, or even Aerobics at all.)

Anyway, it was during this time that I unwittingly earned the moniker of “Naked Girl.” I know: I was equally as surprised when I found out about that. But let me explain: there was one time, a single solitary occasion really, when – after exercising and showering at the agency’s gym – I suddenly remembered a check that I was supposed to have written, probably for boxes of girl scout cookies that I’d beneficently ordered from a co-worker’s child. Before it slipped my mind, I quickly grabbed my checkbook and a pen from my locker, in the ladies locker room, and scrawled out a check.

Well, imagine my surprise when weeks later, a male colleague greeted me with, Hey naked girl!

And when I asked him what the hell he was talking about, he told me that rumor had it I “routinely balanced my checkbook naked in the ladies’ locker room.” That’s how vicious those people – government workers! – could be, and all the more reason I can be grateful I’ve moved onto a kinder, gentler place of employment here at the Office.

But, alas, no corporate exercise facility! (For those of you new to PrincessPissant-AnotherDayattheOffice, the Office is in fact a Starbucks.)

Anyway, this morning, without access to a company gym, Naked Girl went running!

And not even really running.

More like jog-slash-stumbling. And panting. A lot of panting.

I guess I was panting quite loudly in fact – hard to hear over full volume Eye of the Tiger – because halfway around the wooded trail, I was suddenly SHUSHED, by two women who had stopped in their tracks and were taking photographs with their cellphones of something in the brush.

Naturally, I stopped, so as not to scare away whatever rare form of wildlife they’d happened upon. Imagine my surprise, as I approached, with both of them still SHUSHING my feet crackling over fallen leaves and twigs, to perceive none other than . . . DRUM ROLL please . . . a deer.

Yes, that’s right, these two bitches had the nerve to SHUSH me, causing me to abort my bout of concerted exercise in the form of jog-slash-stumbling because they were photographing . . . a deer?

I passed half a dozen deer – some “sleeping” by the side of the road – on my way into the Office. WTF is wrong with these people?

Anyway, the incident totally put me in an even fouler humor than I already am.

Confession time: Princess Pissant has missed a fair amount of work lately, largely because, well, she’s depressed. But before you go feeling sorry for me, and recommending all kinds of addictive pharmaceuticals, let me explain that Princess Pissant is depressed for a very good reason.

You see, my grandmother is dying. And, yes, while I know that we are ALL, in a sense, dying, every day that we’re alive, I mean she is really dying. Starting late last week, Nanny has begun the process of “checking out.” For good.

As much as you think you’re ready to say goodbye – it’s not like she’s dying young; Nanny will be 103 if she makes it to Saturday – you never are.

Kid Number 2 (KN2) and His Older Brother (HOB) are greatly concerned that Nanny might not make it to her birthday. It’s like they think she’s got a shindig planned for her and all her friends at Ultimate Playzone or something. Truth is, I want Nanny to make it to Saturday too. I feel like otherwise, her obituary will read, “passed away at age 102,” and there will be almost a whole entire year she doesn’t get credit for . . .

KN2 and, even more so, HOB have handled saying goodbye to their great-grandmother with uncharacteristic grace and maturity. I had warned them that she would look similar to the skeletons we just put in the yard for Halloween, and that they shouldn’t be scared. Together, they put on a brave face and stood holding hands at her bedside. In unison, they said, “We love you Nanny,” and HOB even leaned over and kissed her sunken cheek.

I spent much of the weekend sitting at Nanny’s side, while she slipped in and out of the past, the present, and the future. I am the first to admit that I’ve always had a Woody Allen-esque fear of, and extreme discomfort with, Death.

But there is something reassuring, almost necessary, about watching someone you love – who is more than ready to go – GO.

While every labored breath seems as if it could be her last, Nanny’s grip is so strong, it can seem as if she’ll never let go.

I know one thing: she is one tough old bird.

Nanny loves to tell the story of when my brother and I were young, and our parents went for a two-week vacation to Peru, and she came to watch us. Evidently, we were so horrible, and she was so traumatized, that when my parents returned, she was standing on the curb, her bags packed, ready to go. My brother and I, remorseful, wept openly and begged her to stay: We’ll never be bad again!

I know Nanny’s bags are packed now; I know she’s ready to go.

And I know that no amount of weeping, or begging, or false promises can make her stay. 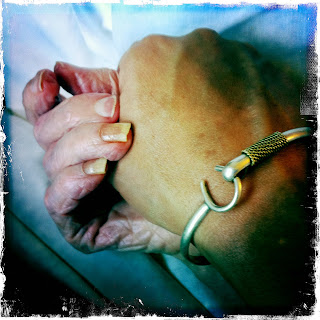